Home » Reviews » HobbyKing Bat 1 Rc Land Yacht: All you need is wind and a sail

HobbyKing Bat 1 Rc Land Yacht: All you need is wind and a sail 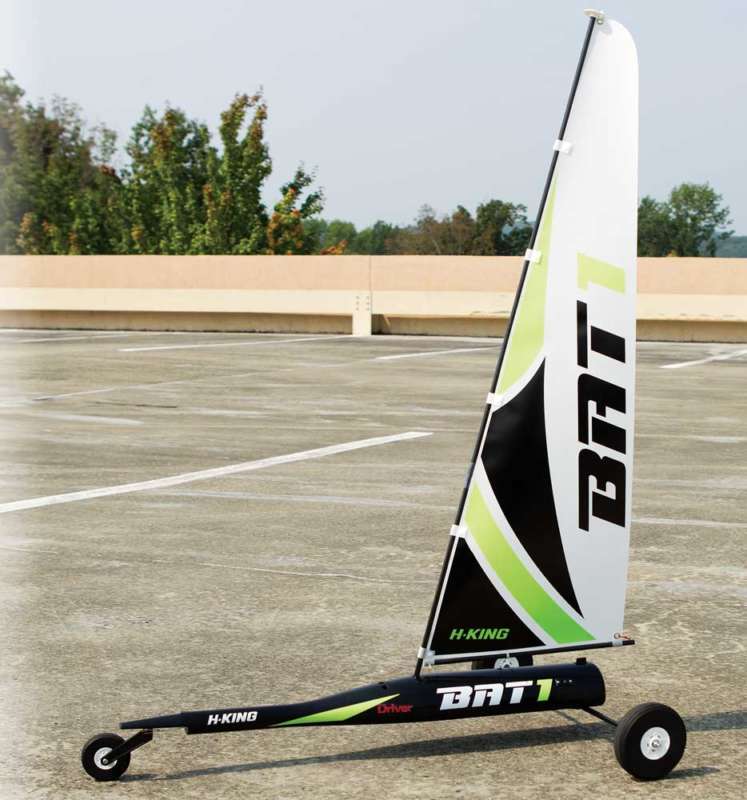 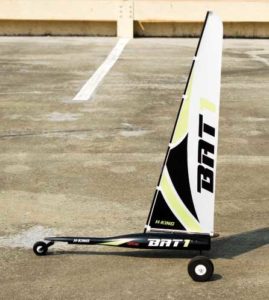 As a serious RC enthusiast, I’ve driven, raced or played with just about every type of land-based RC vehicle out there. All of them are a lot of fun, but in the end they’re all pretty much the same; battery powered, motor driven and with limited run times (on a single charge or fuel fill). So when a very large rectangular box from HobbyKing showed up at the office with the BAT 1 in it, I was all over it. HobbyKing’s BAT 1 RC Land Yacht is a pretty interesting vehicle that only requires four “AA” batteries to drive it. Seems like a pretty weak power system until you realize that the “AA”’s don’t propel it; it relies completely on wind power! Yes, the BAT 1 is very similar to those high-speed wind vehicles you might have seen on the flat desert landscape, all powered by the wind. Now this is different – I can’t wait to give this thing a go!

After wrapping my head around how the sail system works, it was time to head outside and give this wind-powered 3-wheeler some stick time. I gathered up the BAT, the transmitter and the ambitious E-Man and trekked out to the parking structure outside our building. It was a beautiful day, however there was very little wind; the one thing we needed. We gave it our best but without that wind the BAT 1 barely moved. Back to the office we went.

Let me tell you that having the BAT in my office on the bench staring me in the face was like getting a new bike for Christmas only to find out it’s raining outside. It was four days before Mother Nature finally decided to cast some wind my way, so it was back outside to give the BAT another try.

Anything RC is fun for us and when the BAT 1 rolled into the office, we were pretty excited to try it since it was something a little different. Once you get it going (that is, once there’s wind), it’s actually really fun to drive. The controls are similar to a regular RC car so if you have any experience driving, you’ll pick this up in no time.

Transmitter on; switch on. Steering working; check. Boom swinging; check. After my ‘all systems go’ check, I set the BAT down and immediately it started speeding away as the wind caught the open sail. As I approached the end of the parking area, I applied brakes on the throttle to cinch the sail in but found that the BAT doesn’t actually have brakes! Cinching in the sail only limits the amount of air that it gathers; slowing down is simply a matter of it losing speed! Panicking a bit, I cranked the wheel and the BAT aggressively whipped around and almost immediately the sail swung around to the other side. Ah, now I’m getting the hang of it. No matter which way the BAT is pointed, the sail will swing to the ‘wind’ side as long as you have the throttle open.

I drove the BAT around for what seemed like an eternity before Edwin graciously noted that he’d been done with pictures for about 20 minutes! Yes, the run-time on this thing is unreal; as long as your “AA”’s are fresh and there is wind, you could go all day! 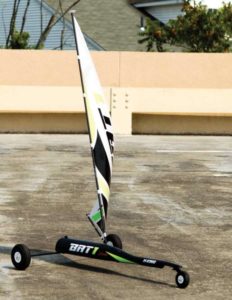 This is really a fun and different form of RC. Go out on a windy day and you could literally sail around for hours before having; the only limiting factor (other than the wind) is the charge in the “AA” batteries. I enjoyed it so much that I’m already contemplating upgrades to boost the performance; ceramic bearings, smaller/lighter electronics and even a LiPo conversion. Salt flats, here I come!