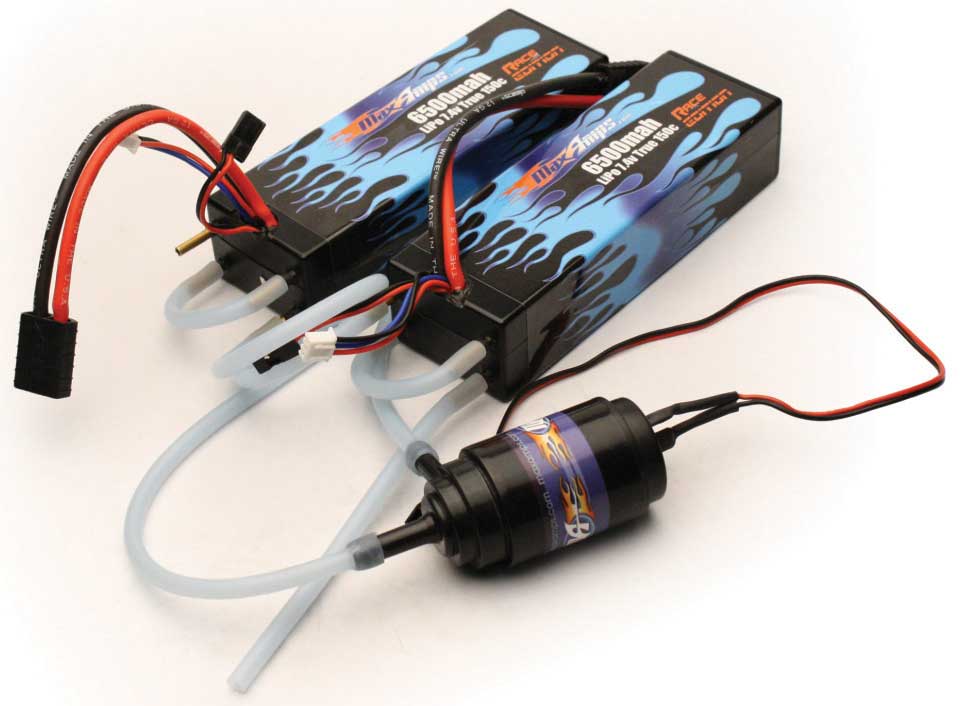 After reviewing the Traxxas Spartan recently, in our parent publication, RC Driver, I am all about finding other reasons to have to take it out again. It has already seen quite a bit of time on the water. I want to make sure I take every precaution to keep it in running order. The cooling system uses the rudder and tubing to send water through the ESC and around the motor and it does it efficiently. Since the boat requires LiPos to reach its performance potential it’s a good idea to make sure they also stay cool. The stock system does nothing in that respect. MaxAmps has a remedy for that.

THE GOODS
These new hard-case, 150C rated, 6500mAh, 7.4v packs tap into the boat’s cooling system and are 100-percent waterproof. The included electric mini pump directs water through the packs via copper tubing. Silicone tubing is already installed on the pair of packs, which makes installation just a little cumbersome but still pretty straightforward. The pump is mounted at the rear of the battery area with the included Velcro strap. The power lead was intended to mount to the servo-style plug from the battery. I chose to run it through an on/off switch first since the pump begins running as soon as it is plugged in. By the time you read this, however, a switch may be included in the kit, which will then be plugged directly into the receiver. The tubing from the pump replaces the existing tubing. One section goes out the rear of the boat and connects to the rudder. The other is attached to the input on the ESC. One of the packs has a section of tubing that is attached to the front of the motor’s cooling sleeve. The tube that was originally there is now attached to a copper tube on the other pack. So the flow goes something like this: As the boat moves forward, the rudder picks up water and sends it to the pump, which then pushes it to the ESC. From there the water is sent to the motor’s cooling sleeve, flows around the motor and is sent out the front of the sleeve to the first pack. It makes its cooling trip through the first pack then out to the second pack. After it makes its way through the cooling tubes it is ejected out the side of the hull. This efficient process keeps water flowing through all the vital organs to provide maximum power and runtimes.

ON THE WATER
The 2S packs won’t provide the speeds of a pair of 3S packs, but will provide plenty of power in the small neighborhood pond where I will be running the Spartan. With everything installed and batteries fully charged I plugged them in and turned on the pump’s switch. Its hum might be annoying to some, but once on the water you don’t hear it at all. When I launched the Spartan I could immediately see water shooting out the side of the hull, indicating that it has made its trip through all the components, just as intended. The boat was quickly up on plane, reaching a top speed of just under 30mph. I am certain it would break the 30mph mark if the pond were just a little larger. After a good solid 15 minutes of running I brought the boat in to give the batteries a quick touch test. They were “room temperature” so back out it went. I squeezed another six or eight minutes out of the packs before any noticeable decrease in top speed. 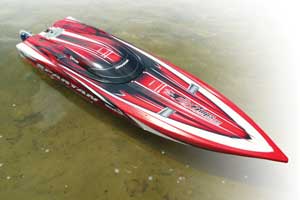 WRAP UP
Heat is not a friend to any of the boat’s electronic components, batteries included. Finding ways to keep it in check is going to benefit me in the long run. Once you get used to having to deal with the packs being connected with tubing when installing and removing them, you’ll be happy with the way the MaxAmps Water-Cooled LiPos perform. As a little bonus, you can now choose what color you would like to have for your packs. There are several combinations to choose from. You can also purchase the WC packs without the pump if you’ve already purchased the original kit. Perhaps we will see a 3S pair of water-cooled packs so we can reach the speeds that the Spartan is capable of.